From laser marking to aesthetic excellence

Specialised in the design and manufacture of fume hoods

During the last few years the fume hood, an integral part of every modern kitchen, has been constantly evolving, not merely in terms of design and appearance, but also from the functional point of view, so that it can now be considered to be on a level with the other electrical appliances existing in every home. A leading role in this field is also played by Falmec, a specialist in the design and manufacture of a wide range of fume hoods. It has been in this business since 1981, with a methodology involving the entire product development cycle.

The process also includes the marking phase, for which the firm decided to use a laser system developed by Lasit and distributed by Betto Macchine of Rubano (PD).<< The decision to obtain the new machine – explains Gianmaria Daniotti, head of the Falmec prototypes industrialisation office – originated from the need to meet increasingly high quality requirements, as well as from the need to be able to optimise performance times and to expand the workable materials >> 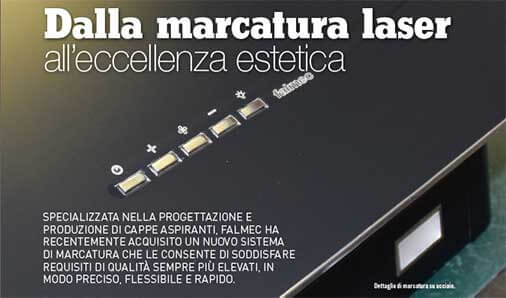 DO YOU INTEREST A SIMILAR SYSTEM?

Request a free quote without obligation! 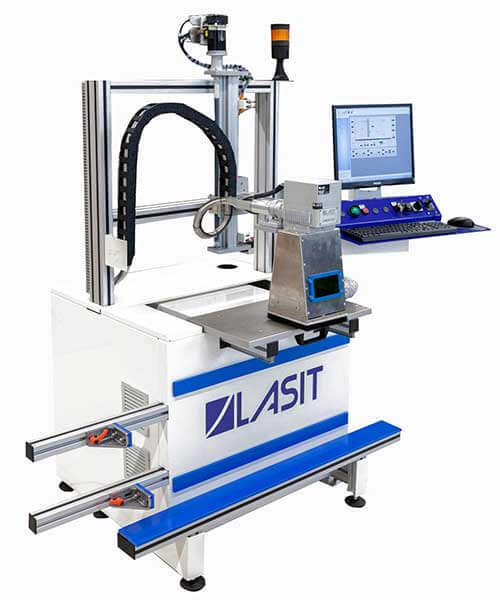 Maximum perfection and speed of engraving

Excellent aesthetic quality of the markings, set-up and performance speed, possibility of being able to work not only on stainless steel (painted, burnished etc.) but also on other materials such as plastics and resins. These are the most appreciated strongpoints of Lasit Powermark Fiberfly, the laser marking system chosen by Falmec for its products.
<< Compared to other marketing techniques – Daniotti stresses – like pad printing or silkscreen frame printing, with this machine we can even process a single article, at an incomparable speed. Also from the point of view of quality, compared to a point marking system the aesthetic result allows maximum freedom of customization without having to worry about the complexity of the design or about how much we need to process >>.
The system is open on three sides, with telescopic closure of the marking area so as to guarantee the complete safety of the operator; the plant has a 300 mm Z axis with ball guides, recirculating screws, and motors with encoders, capable of guaranteeing high precision and reliability. The laser marker uses the most innovative technology of active fiber optic doped with ytterbium and it is the ideal laser solution for precision marking. Fiber is a technology that represented an important achievement in the generation of the laser beam: a multitude of optical and mechanical elements, intrinsically the cause of faults and instability, were eliminated by the new sources and replaced by a single reel of active optic fiber.
Nowadays these measures enable a duration of more than 100,000 hours of marking, thanks to the use of single emitter diodes and the completely integrated construction of the optic part.

In Lasit, to guarantee further protection against overvoltages or micro power outages, a problem filtering system was also designed and, its real effectiveness is verified with a problem generator on each FiberFly marker produced. What is more, a flexible stainless steel pipe protects and guides the connecting cables as well as the fiber optic, which in turn is protected by another steel armour. This pipe, with a diameter of 25 mm, reduces the possibility of an accidental breakage of the fiber to the minimum and creates additional protection against electromagnetic interferences and electrostatic discharges. The markings done with the FiberFly fiber laser marker are thus accurate, indelible and have no environmental impact.
<< The process – continues Daniotti – is carried out with manual loading while the machine is running, piece by piece, with a cycle that, depending on the complexity of the marking, takes between 60 and 180 seconds. With maximum freedom to manage the “chiaroscuro”, from the borders to the logo, to the symbols of the touch control keyboard of the hood >>.
The use of the marking system is simplified and immediate thanks to the FlyControl and FlyCad software, both developed within Lasit itself. Created in a Windows environment, FlyCad adopts the Wysiwyg (What You See Is What You Get) concept and makes it possible to incorporate in a single .dwg file all the information need for laser engraving (power, frequency etc.), any TrueType text combination, series number, datamatrix bar code, together with the commands to use and the management of any movement axes. 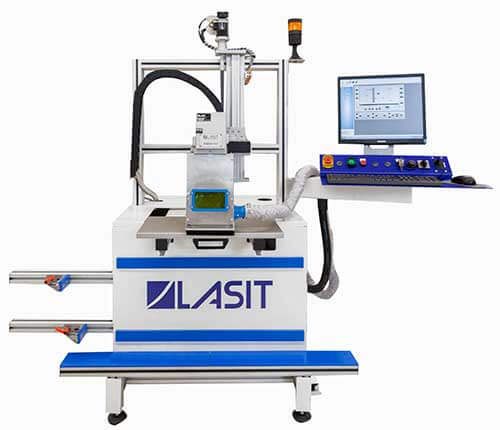 From the fume hood to the filtering system

For Falmec, innovation means giving household hoods additional functions, as well as increasingly high design and energy efficiency.
«The main challenge – adds Daniotti again – not only tends towards search for the design, but also for always more silent systems, capable of improving the air and the salubrity of the whole room where they are installed».
An intense research and development activity that results in a wide range of hoods, including those belonging to the Nrs (Noise Reduction System) and E.Ion series.
<< Nrs is a system developed in cooperation with laboratories specialising in fluid dynamics – explains Daniotti – which made it possible to create a collection of incredibly silent models, with considerable advantages for the quality of life in the kitchen >>.
This technology makes it possible to cook, work, speak, or listen to music, without the typical noise of the hood, while maintaining the highest extraction performances.

E.Ion, instead, stands for an exclusive technology that allows the hood, by means of controlled bipolar ionization, to recreate in the kitchen the atmospheric ions that not only eliminate unpleasant smells in a natural way, but restore an optimal ionic equilibrium, with great advantage for psychophysical wellbeing.
This technology was also adopted for a new range of heat exchangers (Brio series) recently put on the market together with a new series of household purifiers (Bellaria series).

«These products also – concluded Daniotti – will benefit from the flexibility of the Lasit laser marking system, which is now an integral part of our process». 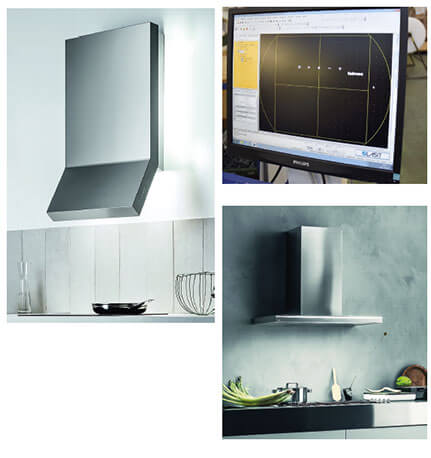 Leave your number here and we'll call you NOW!

Fill out the form for more information!

LASIT Laser markers are designed on the specific needs of the client, from the mechanical system to the software. In 30 years, we have developed Traceability and Aesthetic laser marking solutions for metal and plastic applications.